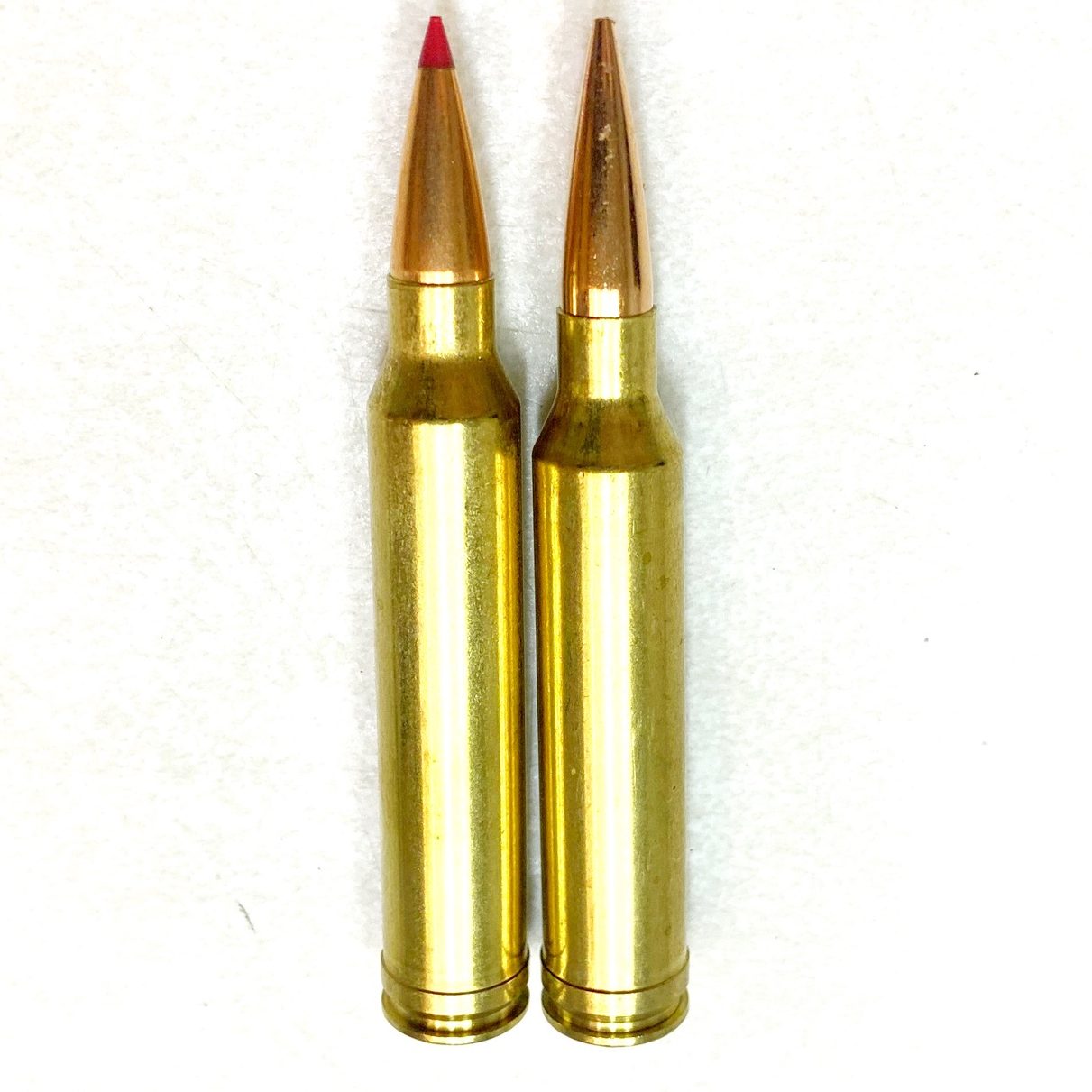 There is a lot of talk recently about flat-shooting cartridges, in fact it’s been a very hot topic for some time now. Many big name manufacturers like Hornady and Nosler keep coming out with new cartridges, and one of the many descriptors of these new cartridges is they shoot flatter than most other things. In today’s article we are going to get to the bottom of this flat subject, and sift out the information you need to know.

What does it mean to shoot Flat ?

Flat shooting is a reference to a bullet’s trajectory, the arch shaped path that a bullet takes on its way to the target. Every bullet begins to drop after leaving the muzzle, but the degree varies greatly depending on many factors. We’ll get into them in a moment.

A flatter shooting cartridge is one that drops less than a comparable cartridge. For example: a 308 Winchester and a 300 Winchester Magnum can both shoot a 165 grain bullet, the 300 will do so at a much faster velocity, and therefore will drop less all else being equal over any specific distance when compared to the slower 308.

What Causes a Flatter Trajectory?

There are several things that cause a flatter trajectory, but first, let’s discuss what causes a trajectory in the first place. In a complete vacuum where there is no atmosphere, a bullet fired would stay on its course without deviating or losing velocity.  But most of us live on planet earth, and live inside an atmosphere that presents varying conditions such as humidity, wind, and high and low air densities etc. This atmosphere is what slows a bullet down, as a bullet decelerates, the time before it impacts increases, allowing gravity more time to pull it towards the ground. In addition to the drop and deceleration, the effects of wind moving laterally cause the bullet to wander left or right from your point of aim.

There are many ways we as marksmen can fight these challenges caused by the conditions around us. But for today’s purpose, we will focus on two; Ballistic Performance, and velocity.

A particular bullet’s ballistic performance is determined by many aspects, its shape, and weight, as well as other factors that give a bullet what ballisticians have called a Ballistic Coefficient. A Ballistic Coefficient (BC) is essentially a numerical grade of a bullet’s ability to combat the atmosphere as it flies through. The higher the number, the better the bullet performs at slipping through the air unaffected.  Your fast acting mind may have already beaten me to the chase here; A higher BC bullet will shoot flatter than a lower BC bullet, all else being equal. And when things aren’t equal, you can really compound the gains. Let’s look at an example:  Let’s evaluate two different designed bullets, of the same weight, fired at the same velocity.

Both bullets are .30 caliber, and both weigh 190 grains, but one is a flat nosed type designed for tubular-magazine lever guns. The other is a boat-tail hollow-point (BTHP) match bullet. When both bullets are fired at 2800 FPS, they follow two different trajectories. The flat nosed (lower BC) bullet has dropped in velocity by nearly 1000 fps at 200 yards, and its drop below the point of aim is four and a half inches. The BTHP bullet has only lost 300 fps at the same distance, and it has dropped an inch less than its competitor. At 400 yards, the difference between them is even more stark, the flat-nosed bullet has dropped below 1600 fps, and lost a very significant amount of its kinetic energy. The BTHP bullet on the other hand is still flying along at over 2100 fps, and still carrying nearly two-thousand pounds of energy. It also has dropped a full ten inches less than the flat-nose bullet. The further out you get, the more disparity you will see between the two.

Even if you had started the flat-nosed bullet at a much higher speed, at any significant distance, the BTHP bullet would still have a superior performance. Velocity can be increased to combat atmospheric conditions, but only so much. The two bullets described above are very different, but let’s say you had two bullets that were very similar and had comparable BC’s. You could speed one of the two up, and gain a flatter trajectory over the other, and better performance, but if you’re shooting potatoes for bullets, velocity can’t fix that.

Isn’t Wind Part of the Atmosphere?

Yes, but it deserves its own little discussion. The longer your bullet is flying through the air, the longer it can be affected by wind. Just as a high BC bullet holds on to its velocity, and drops less, they are also less affected by wind. So a higher BC bullet will deviate less from its point of aim than a comparable bullet. And if you speed that bullet up, it has less time to be affected by everything.

We’ve spoken quite a bit about bullets, the projectile expelled from the muzzle. But it’s important to discuss the difference between bullets, and the cartridge, which is the assembled case, primer, bullet and powder. A cartridge in and of itself is not necessarily flat-shooting, that depends more on the bullet/projectile than the cartridge itself. As shown in the example above with the 190 grain bullets, you can have the latest whiz-bang magnum, but if you are shooting inefficient low BC bullets you aren’t getting what you could. You will find that most current premium ammunition lines however feature the superior and high BC bullets most of us are after.

How Can Flat-Shooting Cartridges Help?

It should be fairly apparent by now that flat-shooting cartridges offer an advantage.  Less drop over distance gives a marksman the advantage of narrowing your margin of error when aiming. They also typically carry more energy than comparable cartridges, new flat shooting magnums like the 26 Nosler will carry more energy and less drop than a 6.5 Creedmoor for example. But does it make them more accurate? Not necessarily. Accuracy comes from consistency, and you can have consistency with cartridges that are not exactly flat-shooting. But if you are shooting further, or in less than ideal conditions, a flat-shooting cartridge can certainly give you an edge. That could be the difference between a hit or a miss.