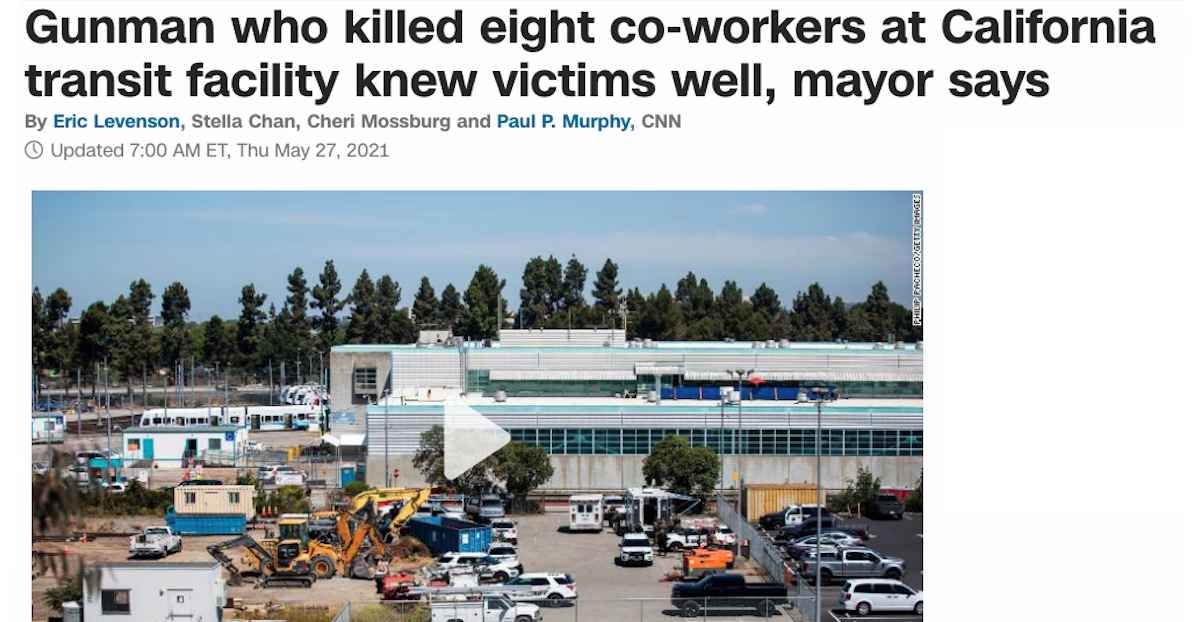 On May 27, 2021, Samuel Cassidy opened fire at his place of work. Armed with multiple handguns, he killed nine people before taking his own life. This happened in San Jose, California just two months after the shooting that left 10 dead in Boulder, Colorado. Nineteen families will never be the same because of the actions of these two murderers.

Are you surprised by this? If you live in California or Boulder, you should be. If you follow the logic of the politicians in these places, the overwhelming amount of gun control should have prevented these shootings from happening. Colorado is pretty friendly toward gun owners on average, but Boulder marches to its own drum. In fact, Boulder has banned the carrying or discharging of any projectile weapon on county property. This includes firearms, crossbows, fireworks, paintball guns, BB guns, slingshots, and more. With these laws in place, how did the shooting at King Soopers happen? The murderer actually lived in Arvada, 21 miles away. Just like the perpetrator in the 2012 Aurora theater shooting did, the mass murderer drove to an area that he knew would give the least resistance.

In Los Angeles, 2020 saw a 36% jump in homicides. In the first quarter of 2021, homicides are up 46% from the previous year. The number is not going down. California has some of the strictest gun control in the nation. Magazines over 10 rounds are illegal, unless you purchased them before the ban, or during Freedom Week. This didn’t seem to matter to Samuel Cassidy. Police recovered 32 magazines that held more than 10 rounds. It seems that magazine restrictions did nothing to deter a criminal who was determined to cause harm.

The restrictions on semi-automatic centerfire rifles are laughable. One of the most recent laws requires shooters who prefer a pistol grip to attach a fin, preventing them from wrapping their scary thumb around it. Even A2 birdcage flash hiders are not allowed if you want to use your standard magazine release. If you have any of these features on your rifle, you have to break apart the receivers and reload the fixed magazine manually. These laws have done and will do nothing to prevent criminals from breaking the law and harming others.

So, where do we see lower rates of homicide in the United States? Maine has the lowest murder rate as of 2019. Maine, Vermont, South Dakota, Iowa, and Idaho make up the five states with the lowest murder rates in the nation. All of these states happen to also have constitutional carry. For those who are unaware, constitutional carry refers to a state allowing anyone who would not otherwise be prohibited by law from owning a firearm to carry one without a permit. These laws have been passed in an effort to remove the need for lawful citizens to ask permission from the government to protect themselves. As of May 2021, 20 states have adopted permitless carry.

California is a strange place. Yes, you can frequently observe homeless men fighting trash cans or relieving themselves in downtown Hollywood, but I’m mostly referring to its relationship with firearms. There are a lot of people in California and a large number of them own guns. Some of the best competitive shooters I know live in California. However, with consistent Democrat control, the state continues to erode the gun rights of its citizens, making claims that the police will protect you. They say these things while they slash police budgets. With officers from major departments like the Los Angeles Police Department feeling a lack of support from their leaders, cops are quitting in droves. With a lessened police presence, crime is on the rise. This is why I say California is strange. The Los Angeles County Sheriff is actually beginning to issue concealed carry permits. Of course, applicants still have to provide “good cause”, meaning you need a reason beyond personal protection to have a firearm.

Makes and models of handguns are also regulated. I’m honestly surprised that brands of toilet paper aren’t regulated at this point. California has what’s called the Roster of Certified Handguns. Manufacturers must supply handguns for testing. Those samples need to pass California’s firing, safety, and drop tests. There’s more. This isn’t limited to make and model. For example, you can buy a third generation Glock 19. You cannot, however, buy a fourth or fifth generation Glock 19. The Roster also limits within that third generation. If the frame of the pistol is a different color, say flat dark earth, that model needs to be submitted for testing or it is deemed unsafe. If you take that same FDE third generation Glock 19 and buy it in any of the other states in the country, it seems that it is safe. Maybe it’s about the large fee that manufacturers need to pay in order to have their guns safety tested. California loves its money.

The purpose of this article isn’t just to hate on California. I lived in Los Angeles for 30 years and I learned a lot living there. One of the biggest things that I learned, especially in the entertainment industry, is that hypocrisy is everywhere. I knew a lot of people who shouted for more gun control and would brag that they won’t ever own a gun. To those people, make no mistake. Every single one of us owns a gun. The only difference is that mine is on my hip and I’m trained and prepared to use it if that time ever comes. Your gun is being held on a police officer’s hip across town. If you call that police officer to come use it, you are still responsible for that death. You’re just outsourcing violence. I’m willing to be accountable for my own actions, and so are millions of people around this country who will gladly put themselves in danger to protect you if somebody decides to do what that madman did in Boulder.

With that shooting came more calls for gun control. We heard idiotic ideas like “shoot them in the leg”, which is such a bad idea, I could probably write an entire article on it. Remember that medical malpractice kills 250,000 people a year. Vehicle collisions took 36,000 lives in 2019 alone. According to the CDC, 2017 saw 39,773 deaths by firearms. Of that 39,773, sixty percent were suicides. Three percent were accidental, police shootings, or undetermined. That leaves 14,542 intentional homicides. How many of those were ruled justified, I don’t know, but that’s almost twenty times less than medical and vehicle deaths combined. I wish that number was zero, but the truth is that this world is full of predators. Predators will use every means they have to harm their prey. When states limit the ability of the preyed upon to survive, that state should be held responsible if they don’t.

We’ve seen the proof over and over. More guns does not equal more crime, but the absence of them allows criminals to run free and decide the fate of the people around them. With Judge Roger Benitez once again standing up for the rights of Californians and ruling the state assault weapons ban unconstitutional, the future is uncertain. If this ruling is overturned, it could mean trouble for citizens of other states that are pushing similar measures. However, if it sticks, not only will millions regain their natural rights, but it will set a precedent that could prevent federal assault weapon bans. For now, if you live in one of these restrictive states, have a plan, stay aware, and make your voices heard.