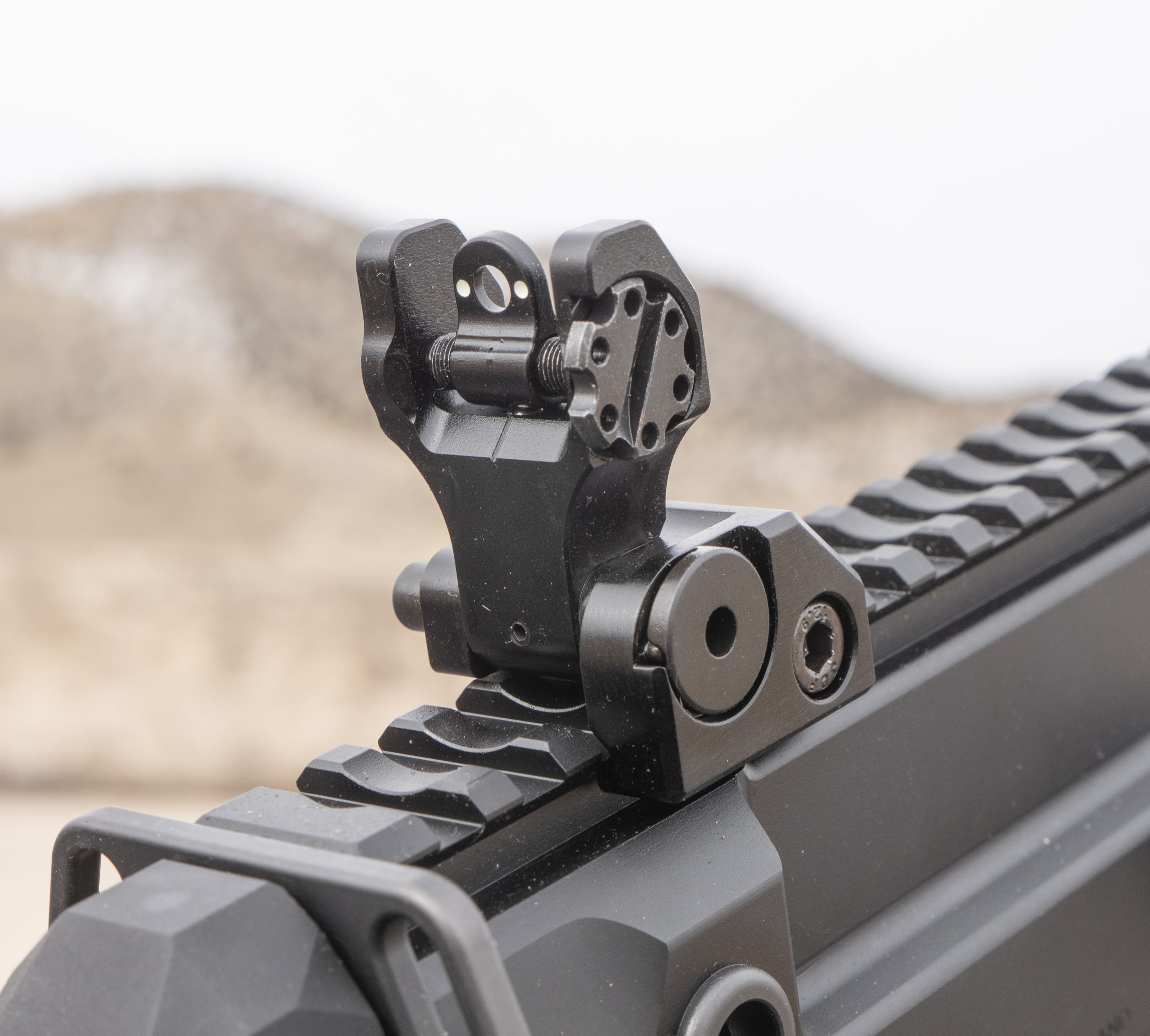 Working as a gun writer and subject matter expert has its perks, amongst them getting the latest and greatest equipment to test. Great stuff, but it’s a very sharp double edged sword.  It leaves the impression our readers, students, or fellow trainers are in the same boat.  Most are not, people purchasing firearms for personal or duty use are lucky to get the basics. Focusing on all the best optics, sights, lights, lasers, and firearms is entertaining but tends to ignore reality. Students I train and train with often tell me they could not afford the rifle I am testing let alone the accessories. This is especially true of law enforcement, even top tier military members tell me they wish they had access to the gun I was writing about.  And while the “industry” has become accustomed to carbines costing a couple grand (or more), users are not always equipped to pay that much. Nor are they necessarily capable of adding a $800.00 red dot. Put together what more than a few “experts” tell you is the minimally effective “combat ready” carbine and you are completely out of reach for most consumers, even in this current “bandemic” fueled shortage. Never forget, regular people (not experts) defend their lives every day with what they can get, not what an expert tells them they need.

Much of the training industry gets sucked into the same trap. I’ve seen trainers tell students they “must” have a red dot sight, and if it’s not (fill in the brand) it will break. That old “it’s your life” do you want to trust it to that? It’s easier to tell people what they need then teach them to use what they have, a sad reality.  Carbines costing a couple grand are great but they are simply not “required” to get the job done in most cases. Rather than tell someone they cannot afford to survive a fight, teach them how to win it with what they have. You would be amazed at what sound tactics can do with what’s at hand.  It’s no different when it comes to sights. Red dots are great, the best ones even more so, but very few problems in the real world cannot be solved with a simple iron sighted carbine in the hands of someone with training. Unpopular these days to say for sure, but no less true.  For most it’s better to take that money and spend it on ammunition and training using the best iron sights you can get.

Time to get real

Reality check, movies, television and video games are not real.  Real life self-defense is much simpler and less cinematic.  Real world encounters outside a military engagement can be solved with a simple carbine, iron sights, and a couple magazines, probably just one. As an SME studying every shooting I can get real data on is part of the job, has been for twenty plus years.  Few incidents where a rifle was, could, or should have been used required more than a magazine. There are anomalies where iron sights would not be ideal, but make no mistake they are not the norm.  In most cases it could have been handled by a solid set of irons and someone who knows how to use them.  A colleague of mine took down an armed subject several years ago at 100 yards with a Mossberg 590 A1 shotgun using ghost rings and a slug, so yes it can be done and is far more frequently than most in this industry will admit in public.

Typical carbines are a 300 yard tool, very few civilian engagements occur at 100 yards let alone 300.  The vast majority are inside 50 yards, many from across the room. Even police sniper engagements average under 100 yards with most across the street. Looking at most recent police shootings using carbines they are all within a couple houses, in the front yard, behind a car, or across the street.  Justification for shooting at any greater distance is rare let alone viable. Using those realistic parameters let’s take a look at what to do, and the equipment available to get it done.

What’s in a name?

Over the years iron sights have been relegated to a “back up” role.  This has led to a decline in usability, more feel good than work well. Like the tiny pistol you carry but hope to never fight with, BUIS are something you have but never expect to use. If they are the only sighting system don’t scrimp. Remember, if your dot does fail, they ARE the only sighting system you have. Cheap folding sights with no means of adjustment are not primary sights or even decent BUIS. With no RDS they need not fold, my preference being they don’t, at least the front sight. It eliminates shifting or small parts breaking and having them fold when using them or fail to when you need them. Your standard A2 sight that’s part of the gas block is fine, and there are several that mount to your top rail. You want them to be rock solid, easy for you to see, and designed for the fight you are most likely to encounter. Most consist of a base that houses a post that can be replaced with dots, bars, lines, tritium, circles, you name it, pick the one that works best for you.

Red dots are “fast” so at least I am told, but just like an RDS on a pistol mine were never there for speed. There biggest advantage is the lack of a need to align two sights, not always easy on the move.  They are fantastic when running a gas mask. But,  If you are close and precise alignment is not necessary red dots may not be faster.  The farther back you go the greater the advantage to a red dot, especially if you never train that far away with irons. That’s a reason to train at distance, not necessarily spend several hundred dollars on a dot. After years running irons I am just as fast and accurate at CQB distances especially with true ghost rings (circle within a circle). Several companies make completely covered front sights that work the same way. Standard on FN America’s SCAR you can get them on a few different rifles.

Another good choice is a bar / line sight that is much easier to pick up when close. Big Dots are nice, might as well be an RDS. With sufficient practice you can fold that rear sight down and get most things done with the front sight alone, something we did for years with our shotguns when Red Dots first arrived and failed often.  For longer work there are several different posts you can choose for your front sight, and varying ways to adjust for elevation with the rear. Thin posts or blades are great, I regularly hit 400 yard silhouette targets with the 115 year old blade sights on my M1903. At long range these cover up very little of the target making holds easier. My preference for 300 yards and closer is the Trijicon (or similar) tritium post.  They help in low light and have a flat top I can line up on target more precisely.  Zero them for a hold under the target and you can reach out a long ways.

In most cases the front sight is adjusted to your preferred zero, elevation is handled by holding high on the target or adjusting the rear sight.  If longer range is in the cards pick one you can adjust easily on the fly, SCAR’s sights are great, so are any standard A2 style.  In most cases holds work at 300 yards so rears that require tools to adjust are fine unless you need to really reach out. You can get tritium rear dots for your ghost ring, they are nice but less critical.  Given how close your eye is it’s hard to see, never use them myself.

Iron sights take practice, its why an RDS is so popular these days, it allows department trainers to be note takers instead of teachers. A proper zero is critical with anything, mandatory with iron sights.  There are several out there, which one is less critical than knowing the one you choose. Practice at any range you will likely incur from across the room to the farthest you may encounter.  In most cases you will change where you hold that front post up close so know exactly where to hold at any range.

The rear ghost ring was designed for soldiers to use at ranges out to 200 yards (large hole) moving to 300 and beyond use the small hole. For anything across the yard, maybe even street, up close for sure  use the larger hole. You want to know where the front post is on the target while its somewhere in the middle of the rear. Need more precision then line up carefully, but at that range you have more wiggle room than you would think.

For some of us the “dot” is  mostly three sparkles and may even obscure the target. None of us will be 30 forever, dots for many are hard to see and harder to define. Optics are a cure, but now you are adding more weight, more money, and you may be even slower up close. Sometimes equipment is not an advantage but a liability, definitely something to consider.

There are reasons an RDS is a must, most involve more than average people will see or use. Night vision makes it almost a requirement unless you have an IR laser, but you are adding thousands to the cost of a rifle either way. Some agencies use NVG’s, very few by comparison even fewer outside government have 5K-10K to spend on them. Refer back to the fact that magazines, movies and video games are not real!! It does not mean irons are useless, just not suited for the task. The point is not to say an RDS is not a great tool, it’s just not the only one, nor is it magic or flawless. If its electronic it can fail, to think otherwise is just foolish, dangerous if yours or others’ lives depend on it. If you can afford one great, just neither discount nor ignore the things you can do with practice and a good set of iron sights, it’s one of those skills that just may actually save your life when that magical, mystical, never to fail red dot falls off or does not work!