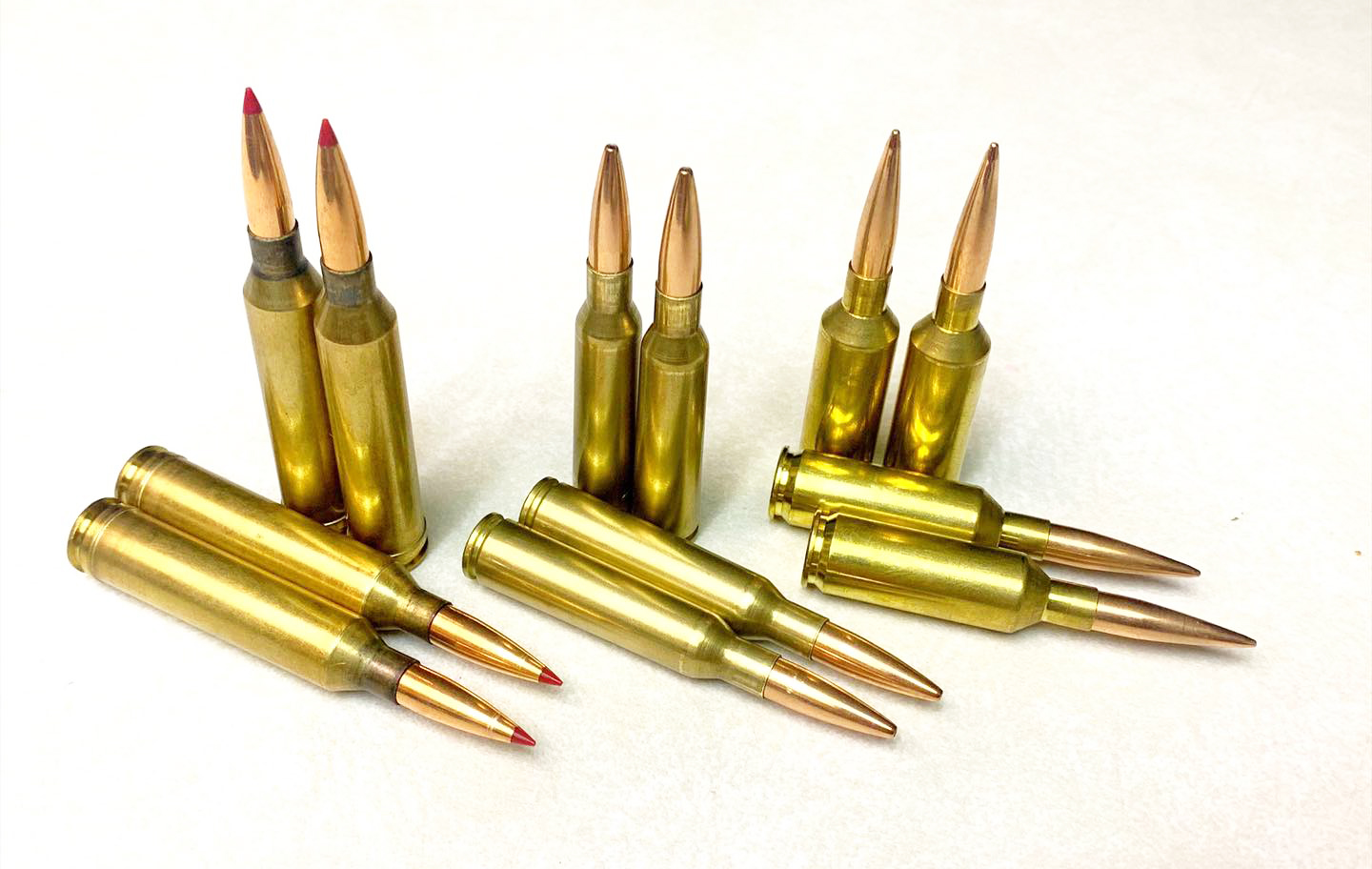 Top five you say? What kind of maniac could narrow it down to just five of the best cartridges? I mean the world is littered with spent casings from countless different cartridges that offered something that another didn’t. So to avoid being labeled as that guy, I am instead going to go over the top performers as it applies to my shooting and how I did it for myself.

The first step in this process would be to know and set your limits, unless you’re Elon Musk you probably can’t afford or build a rail gun for your weekend shooting exchanges, so obviously there is a budget to keep. And if you live in flat country where the furthest you can see on a clear day is five-hundred yards, you have very different needs than someone who lives in mountain ranges where one-thousand yards is just to the next turn in the trail. Another important consideration is the target, hitting paper or steel is much different than meat and bone. So it’s very important to define your needs properly, both ballistically and financially.

If your goal is extreme distance competitions like King of 2 Miles, then you are going to want something big. My experience here is minimal, but there are many marksman shooting these distances with a cartridge I am quite fond of and my choice for extreme distance, the 375 Chey-tac, or something similar to it. The cartridge is perhaps the most common in big-bore ELR shooting, as the ammunition and components are plentiful. Not only that, it is an outstanding performer.
With high performance bullets like the Cutting Edge MTAC or the Warner Tool Flat-line, you can shoot distances that most people have never considered possible. Of course all this comes with significant cost, and perhaps an above average level of dedication, but how else could you call yourself an extreme shooter?

Okay, Maybe not that extreme

If your goals are perhaps a little more mainstream, and you don’t feel like spending $10-$20 every time you pull the trigger, then let’s talk about a better fit for you. Shooting a mile or less is much more common than it was even ten years ago, and one of the reasons it has become so commonplace is the proliferation of the venerable 338 Lapua to so many affordable rifle platforms. But that’s not the cartridge I was about to recommend, I was about to say the 300 Norma Magnum. Why the 300 over the 338 you might ask? I’ll explain.

300 Norma ballistics when using high ballistic coefficient bullets like those available today, will rival those of the 338 Lapua. There are pros and cons either way between the two, as far as barrel life, recoil, and even suppressors if that’s your thing. High quality bullets loaded in the 300 Norma make it a devastating long-range performer, whether you are shooting targets, big-game hunting, or anything else. I prefer the more slender and faster fired bullets in the thirty-caliber as compared to the heavier and a bit slower thirty-three caliber bullets of the 338LM.

The 300 Norma will easily shoot to a mile and beyond, handily take down any North American animal, and has a huge selection of bullets and ammunition selections of the highest quality.

Many years ago, before I had experienced both the 338 LM and 300 NM, I found myself in quite a quagmire. I wanted a new barrel for my SRS that would allow me to shoot comparable ranges to those cartridges (1700-2000 yards) , but I was but a common man. I had nowhere near the money to feed a Lapua or a Norma, which is no small cost. Buying a barrel is one thing, but coming up with all the ammunition components needed to become proficient and shoot as frequently as I do is another entirely.  So I began a study to find a suitable stand in, a champaign cartridge on a beer cartridge budget so to speak.  What precipitated from my numbers evaluation, was this; a very high BC bullet in the 7mm (.284) caliber is comparable to the BC of the bullets commonly loaded in the 338LM. So if I could get them up to comparable or better speeds, I would find myself shooting Lapua distances on  Remington resources.

After some careful market evaluation, I was quoted a build for a 24″ 1-8 twist barrel chambered in the mighty 7mm Short Action Ultra Magnum (7SAUM). And before I knew it, my poor-man’s Lapua was in my hands.  I had done all my prep work before-hand, and I had loading components ready to go. I ended up shooting the Sierra Bullets 183 Match King, which has a very high BC, and my new barrel would launch them at a magnificent 3050 feet per second (FPS).  After spending a few seasons hunting with the 7SAUM, I was completely convinced I had made a good choice for the times. My SAUM shooting the 183’s actually shot flatter than the mighty 338 out to around a mile, the energy on impact wasn’t as high obviously but I wasn’t planning on hitting anything besides steel at those ranges. Even so, the SAUM retained more than enough energy to take down an animal as far away as 1000 yards, so I was certainly in good company.

Nothing I’ve mentioned above is particularly common, or very cost effective for your average shooter. Sharp marksmen have been shooting significant distances for a very long time with everyday cartridges like the .308 and 30 06. And with proper bullet selection and load development, you could certainly continue on that fine tradition. Or you could embrace something more contemporary.

Go ahead and light your torches, sharpen the pitchforks, and prepare your best effeminate insults because we’re about to use the “C” word.

Just prior to the current ammo crisis, the 6.5 Creedmoor had infiltrated nearly every little ammo shelf across the country, and for good reason. The 6.5 CM offers 300WM ballistics with recoil and cost subordinate to even the 308 Winchester. There is an extremely high-quality components and ammunition selection for the 6.5, and its easy to load and shoot. There is so much to like about the cartridge, it begs the question why it is the subject of every sophomoric and unsophisticated insult the internet has to offer. Personally I believe it to be its own worst enemy, unfledged shooters are easily tired of hearing how great the Creedmoor is. Especially since what they choose to shoot is obviously better because they chose it, at least that’s how they feel.
Do not discount the Creedmoor, no matter what the haters say, it is what it was built to be; a great shooting cartridge for those first thousand yards, a great deer hunting cartridge, and anything similar to those two disciplines. It can be found nearly anywhere ammunition is sold, making it a strong contender on this list.

Out of left field

My tastes have changed, and my budgets matured, so I’d be remiss to omit my latest favorite. I wasn’t sure whether to put it in my list or not, due to the obscurity, but this is my list so I’ll do it my way.

Wildcats are a little different, like fingerless gloves at the range, or guys who wear fedoras. Wildcats if you didn’t know, are illegitimate children of the cartridge world, derived from other cartridges that are either “necked up” or “necked down” and usually “blown out” to create a whole new cartridge. Many of our best cartridges were born this way, and to that list I add this one of my personal favorites.

The 257 Blackjack is a cartridge formed by shortening the SAUM case, changing the shoulder geometry, and necking it down to twenty-five caliber. Simple enough, but the crown jewel of the cartridge is another very high BC bullet built by Blackjack Bullets (designer of the cartridge). The 131 grain bullet has a .340 BC, which is nearly untouchable by anything comparable in size and price. Nearly none of the 6.5 and 6mm bullets that would give the Blackjack a run for the money can, especially when shot from the 257 Blackjack cartridge. From my 24” barrel the muzzle velocity is 3270 FPS, and with that impressive .340 BC you can imagine the extremely flat trajectory. This little short action cartridge will reach a thousand yards with less than 5 MRAD of elevation, and when it gets there it will still be packing well over a thousand pounds of energy and more than 2200 fps. It doesn’t go subsonic till well beyond two-thousand yards, making it very competitive in the same ranges as the 338LM and 300 NM mentioned above.

Would I recommend the 257 Blackjack for long-range shooting? Not at the moment, the tediousness and dedication it takes to run a wildcat cartridge like this is probably more than most would care for. But soon there should be factory available brass and components, making this a shoe-in for anyone interested. It is truly an amazing little cartridge.

So there you have it, my list of my top five long range shooting cartridges. You may take them or leave them, and you wont get any argument from me. Every shooter can decide what works best for his/her needs, and create their own top five.
The good news is that there are so many great choices, despite my little list of cartridges, I could probably make due for the rest of my life with just a plain jane 308.