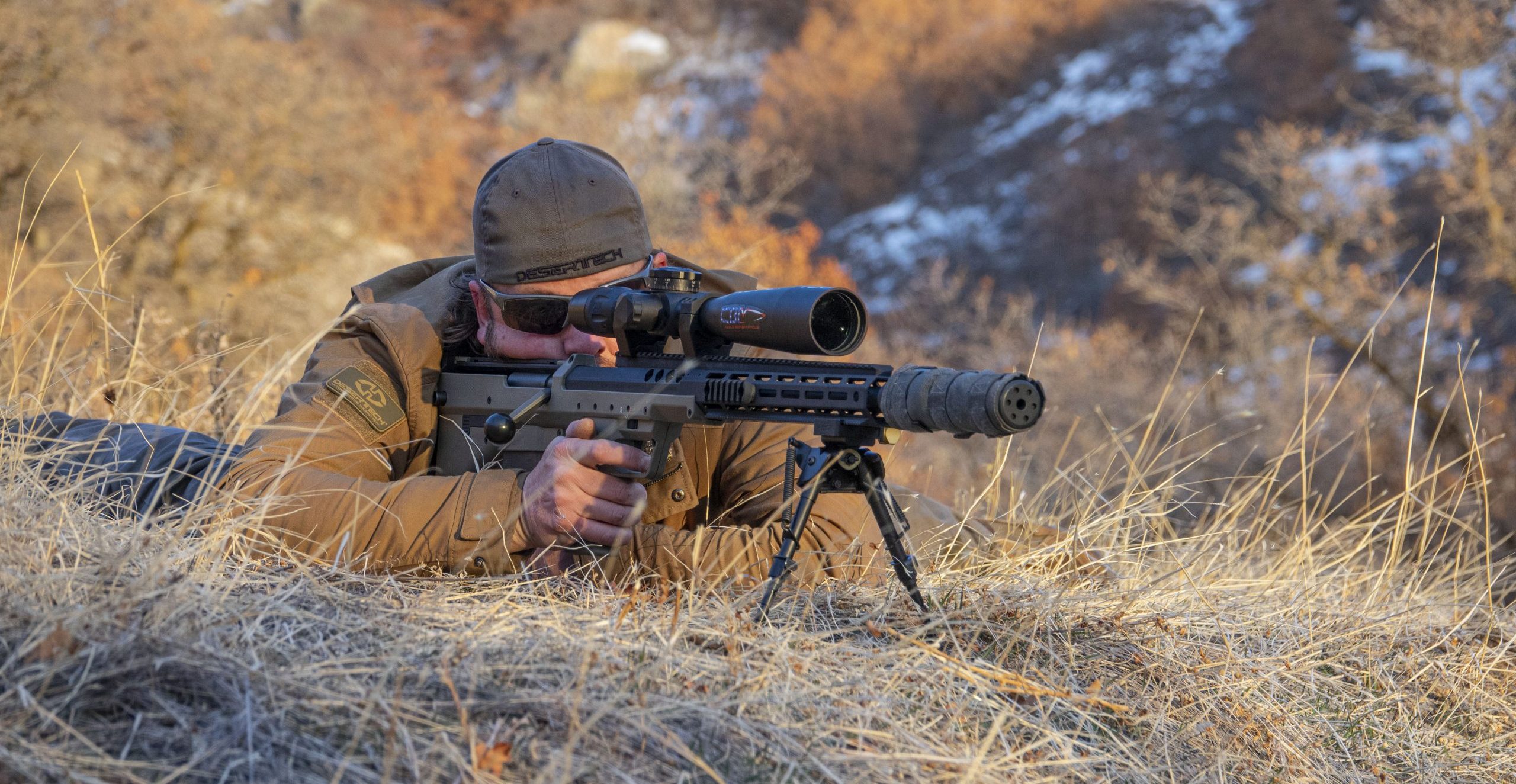 We keep hitting on suppressors here on the Desert Tech blog, partially because we are suckers for suppressors, and also because everybody else is also joining the trend. Some trends are just trends, but the suppressor craze is one I can get behind fully. One of the big questions many new suppressor users ask, and one that often still perplexes those of us after decades is; should I get a direct thread can, or a brake mounted one? Hopefully by the time your done reading this, you’ll have a suitable answer.

First lets make sure we understand the differences. Direct thread suppressors are fairly self explanatory, they have threads on the mounting end of the suppressor that are designed to directly engage with the muzzle-threads of the host firearm. Thread pitches vary depending on many factors, but mainly on the caliber of the anticipated host. The most common sizes are 1/2-28 for rimfire and .224 caliber centerfire rifles, 5/8-24 for rifles between 30 caliber down to 6mm, and for .338 sized rifles the common thread pattern is 3/4-24.

So lets get to the meat and potatoes of the discussion; which one is better for me? The internet is filled with hatred for the person who presents the old “which one is the best” question, only you can decide that. But with the right understanding you will be more than capable of making a good choice.

Direct thread suppressors are often considered to be better for accuracy, many people suggest them for precision rifles citing this as a better choice. That may have been true in the past, but in my experience direct threading suppressors are no more accurate than brake mounted cans. This is likely due to improvements in technology and manufacturing process’. But a direct thread suppressor is simpler by design, that is for sure. Its simpler mounting system can translate into various benefits like lighter weight, less expensive to manufacture, and single point connection to the host. Perhaps a downside if there is one; some direct thread cans have multiple threaded end caps, meaning you can change from one thread pitch to another, but if you don’t have that feature you are stuck with whatever it comes with. For many of us, this not a deal breaker, but it is nice to have options. Another issue that occasionally arises with direct cans is coming loose during strings of fire. With no mechanical lock to keep the suppressor in place, they can work their way loose which could be catastrophic.

QD and brake mounted cans have their own set of advantages. The Q in QD stands for quick, so as you might imagine if your application will require lots of removal and installation of your can this could be an advantage. Another benefit is you can use as many hosts as you want, installing the appropriate brake on each one. This makes things easy and fast to move the suppressor around on various host weapons, though there is obviously additional cost. You also have the benefits of the muzzle device on the host weapon when the suppressor is not being used.

If brake mounted suppressors are your choice, you’ll want to ensure you clean them with regularity. Especially with rimfire guns that tend to foul faster than centerfire weapons. It doesn’t take much looking to find a case of a suppressor stuck to its mount from carbon or lead buildup, and that is a problem you don’t want to have. Another concern that has mostly been solved by design is the alignment issues from having multiple tolerance stacking issues. Brake mounted suppressors have at least two points of alignment that must be near perfect, whereas direct thread cans only have one. If your host doesn’t have perfectly concentric threads this could be an issue. And again, keeping the mounting surfaces clean will go a long way towards maintaining proper engagement.

Alignment is as important as anything with suppressors, there is nothing worse than the dreaded baffle strike. Minimizing possibilities for misalignment should always be on your mind, particularly with brake mounted suppressors. Often these brakes need to be timed, to ensure the ports are horizontal if they have them. Make sure you follow the manufacturers directions when mounting the brake, they are typically timed using precision cut shims of assorted thickness. When the appropriate thickness of shims are collected between the brake and barrel, the brake timing will be perfect. Shims are not to be confused with crush washers, which should not be used when mounting a suppressor ever. A crush washer is just what it sounds like, a washer that is designed to “give” when tightened against. They are very useful for aligning muzzle devices as they are plentiful and cheap, but they don’t always give evenly, and can easily cause a misalignment when used with a suppressor mount.

Whether you check with a glance down the bore (of an open bolt firearm of course), or use an alignment rod in the bore, its not a bad idea to check your suppressors concentricity when in place.

If your just getting into the suppressor game, or even if you’ve been in the club for years, theres hardly been a better time. New technology has been flooding the market like gas into a bolt carrier, this has resulted in many improved options for suppressor consumers. Materials like titanium, stainless steel, and inconel have improved durability and reduced the weight added to your host.
Innovation driven by market pressures have also resulted in manufacturers creating some wild new designs, which for the most part have been very beneficial. Some examples of this are manufacturers using standardized thread patterns and sizes, allowing end users to customize cross-brand mounting options and host applications to whatever fits their needs or preference.

Another fantastic development has been multi-purpose suppressors. Modular cans now allow users to install the same suppressor on their 9mm pistol, 5.56 carbine, and a 308 bolt rifle and so on. Threaded end-caps on both ends, multi-staged, and a multitude of boosters and mounting options make these modular suppressors ideal for those shopping for their first can or those who own a dozen.

Your shooting practices are best known by you, so with the information outlined here, you should be able to decide what kind of suppressor best fits your style of shooting. If you do long strings of fire through multiple auto-loading rifles, then maybe a full-auto rated QD can is the best fit. Or conversely, if you are using a suppressor on a bolt action hunting rifle, a lightweight direct thread suppressor might be just the ticket. Either way, you can add some class to your shooting practice.