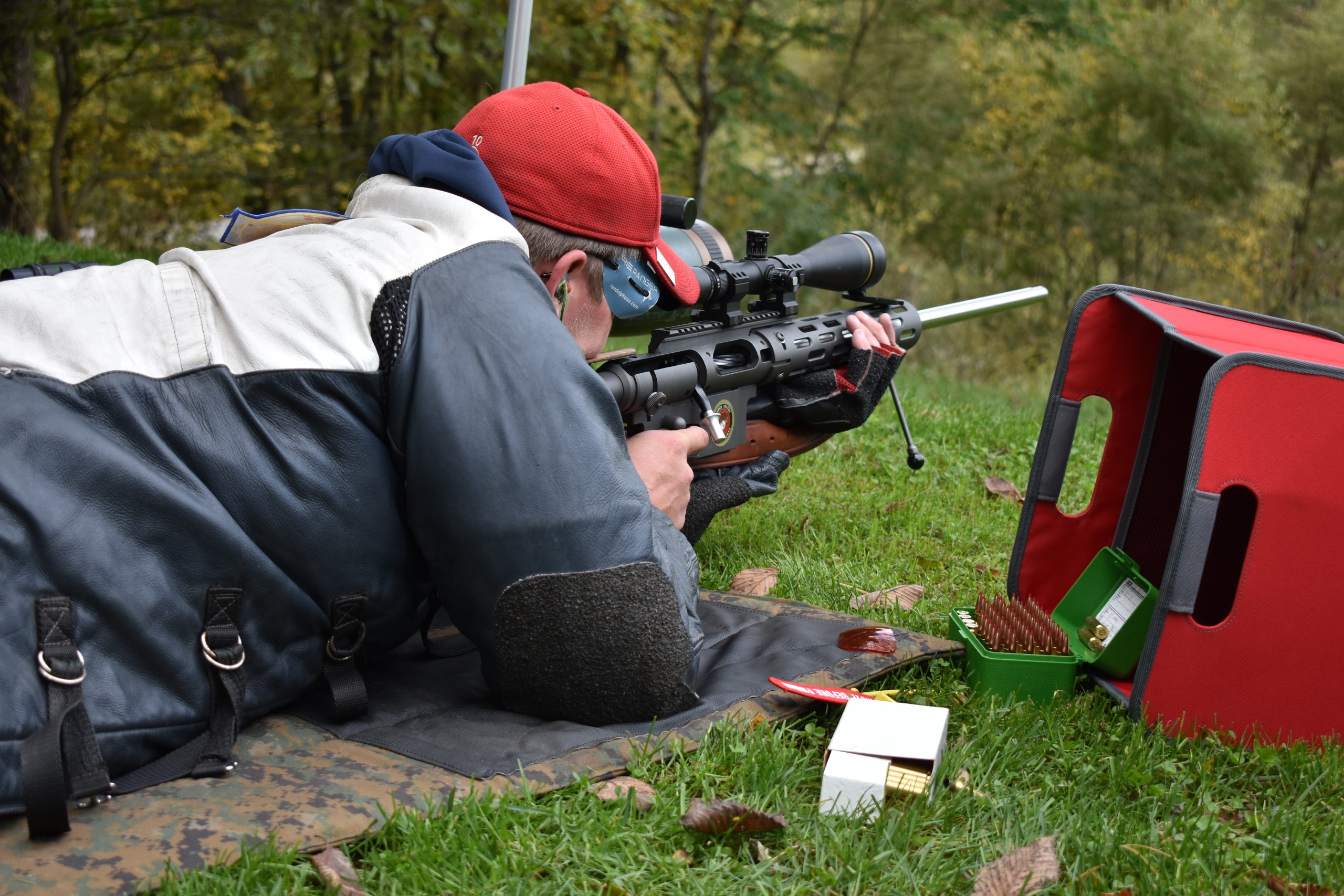 Shooting with a Sling

Rests, bags, bipods, shooting sticks — keeping the rifle as stable as possible is key to taking a good shot. What about slings? Many people view them only as a tool for carrying a firearm or as an accessory to an older military rifle. Certain types of rifle competitors depend on them – and learning to use one is an art.

There are many different sling configurations, but all slings designed for competition have the same purpose – to help stabilize the rifle. They are used in combination with a shooting position, typically prone, though they are also used in the kneeling and sitting positions of certain disciplines.
I have learned about sling shooting through competing in high power service rifle, Palma, and some smallbore. The concept is relatively simple. The sling is attached to the rifle at one end with a loop at the other end which goes around the arm. Some mechanism exists to tighten the sling and keep it fixed in a certain position. Think of wearing a sling like wearing a tourniquet, only it shouldn’t be so tight as to cut off blood circulation.
The best way to start is with a “web sling” Most shooters graduate from this model over time, but it is a cheap, one size fits all option that is relatively intuitive to use. This is a traditional military style sling with metal hardware. Picture a green cotton belt threaded through a metal Pilgrim style belt loop with another latch near the end. This “belt loop” is moved along the “belt” until a loop larger than the diameter of your bicep is formed. Open the latch and pull the folded end of the “belt” back through the latch until the latch slides freely along the “belt.” Take this end and feed it through the sling swivel that is either attached to the rifle’s fore end or incorporated into a hand stop. Feed this end back through the latch and pull until the desired level of tension is achieved, then press the latch to “lock” it in place. This process is easier demonstrated than described, but more advanced leather and match slings work the same way, but with different hardware than a web sling.
It is not as simple as putting your arm through the loop. The sling goes on the arm of your non-firing hand. I will detail the process for a right-handed shooter. With an empty chamber indicator in your rifle and the rifle on safe, rest it against your right shoulder. The sling should be attached to the rifle. With your left hand, hold the sling out in front of you. The loop should be dangling on the end opposite that attached to the rifle. Be sure the sling is not twisted. Grab hold of the loop, and turn it a quarter turn right, then slide your arm through. This sounds strange, but eventually it will become second nature. The reason for this is so that the sling does not cut into your wrist. The next step is to reach over your sling with your left hand and grab the fore end of the rifle. The sling should rest against the back of your hand, but not be cutting into it. The same process applies for left-handed shooters, but in reverse.

The only true way to gain comfort using a sling is to practice taking it on and off. Adjustment comes second. Choosing the proper length of your sling depends on your shooting position. It will generally need to be adjusted when moving from the sitting position to the prone position for example. It helps to have a second person assist with fitting the sling. The first thing to do is to assume the position without the rifle and without the sling. For example, lie on the floor with your elbows positioned as if holding a gun. After ensuring there is no ammo in the area and the firearm is safe and unloaded, assume the position with the rifle but no sling. This is your natural position and the sling will help to make it “tighter.” Sit back up and put the sling on with it attached to the rifle. Now slide the loop over your arm and as high on your arm as it can go. Do not leave it directly on your bicep as when tightened you will be likely notice a “heartbeat” or “pulse” that adds movement to your position. Make sure the long end of the sling is loose. Assume the position again, with the sling resting against the back of your non-firing hand. Have someone open the latch and pull the end of the fabric part of the sling until taut, then close the latch. Relax your muscles. If the gun seems to be pulling a certain way, or if the position is painful, the sling is too tight. If you are holding up the rifle with your muscles, it is too loose. A properly adjusted sling is important as it takes tension off of your muscles which results in less movement of the muzzle and more accurate shots on target.
Several varieties of slings exist and there are several configurations or ways to set them up. The biggest decision you need to make is choosing a web or leather/synthetic sling. A leather or synthetic sling is composed of two straps of material with metal “frogs” and either leather or synthetic “keepers.” It is a little more complicated to use than a web sling, but offers the benefit of the shooter being able to always get the sling back to where he/she had it. With a web sling, when you undo the sling or change positions it is nearly impossible to return to the same position you had previously because the latch slides along the sling rather than attaching defined locations. The holes of a leather/synthetic sling are typically numbered and allow you to quickly and easily set-up your sling for each position and return to the same spot.
This is really only a primer to shooting with a sling, the true experience comes with practice. The bottom line is that a sling is not just for carrying a rifle or for aesthetics, it is a tool that when used properly can greatly enhance your shooting experience and increase your accuracy.