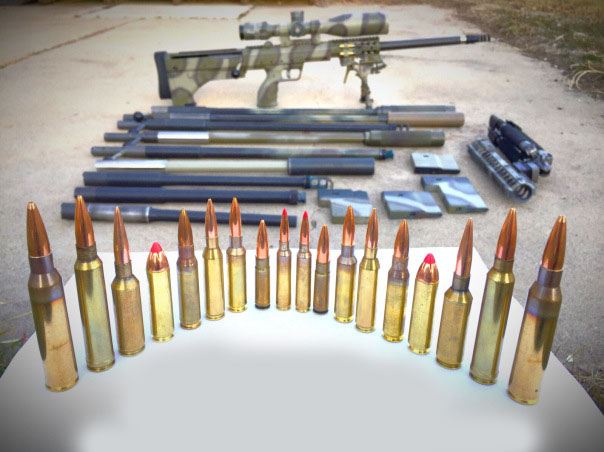 Some SRS Features You May No Know About

There are many great features to the Stealth Recon Scout (SRS) family of rifles, many marksmen use them all, and others do not. Today we are going to touch on a few things that some SRS owners aren’t aware of. For most of us SRS owners this will be old news, but for those who don’t know, it can be very handy information. This is especially for those who are looking at getting into one, and understanding all the benefits the SRS offers.

The SRS was designed around the 338LM cartridge, but there are untold cartridges that will work in the SRS. I’m always surprised by how many people only shoot one cartridge in their SRS. With the thriving aftermarket support for the SRS you can have barrels, bolts and magazines for almost anything. From .223 sized cartridges all the way up to the 37XC, you can nearly replace an entire gun collection with one SRS. It makes me wonder why people only buy one caliber conversion kit, or even worse, buy multiple SRS’s only to shoot them in one caliber. Despite being one of the rifle’s strongest points, its multi-caliber feature remains a mystery to some.

The second feature that also remains a mystery to many, is the rifles return to zero capability. The receiver interface of the assortment of barrels that you can use in the SRS are all the same, this interface is extremely robust and repeatable. That means that you can pull your barrel out, install another, and then after shooting the second barrel you can reinstall the first barrel and it will hit in the exact same spot as before.

A Leg to Stand On

The monopod was added to the SRS to give shooters a solid and stable rear support. There have been many rifles sold over the years that didn’t get one at the factory, but they are standard equipment now. Again it surprises me how many people are unaware of this awesome feature of the rifle, or those who chose to forgo it. It is quickly deployed with a gentle pulling down of the foot-knob, and it is micro-adjustable by turning the foot either direction for up or down. It is so simple to use, you simply get in the firing position aiming at your target, then pull down. After the foot springs to the ground below you, you simply turn it with your non-trigger hand until it supports the butt of the rifle. It is so sturdy and simple that oftentimes after making a shot I can get up while another person gets behind the rifle and it’s still perfectly centered on the target.

The trigger in the SRS is an outstanding one, one of the most common comments about the rifle is the quality of the trigger. It’s a great trigger, not just good for a bullpup, it’s a good trigger period. So good in fact that many people never take the time to adjust it to their liking. Both old and new SRS rifles have adjustment screws for both pull-weight and creep adjustment. Follow the directions in the manual, and you can have your trigger set just the way you like it.